Explanation of devotion to the Sacred Heart of Jesus 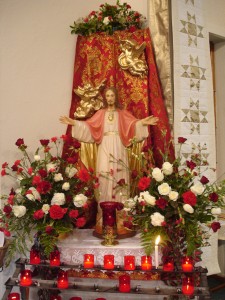 People sometimes think that devotion to the Sacred Heart is a nineteenth century piety. But it is much older than that, and it is much more than a pious devotion. The roots of this devotion may be found in the Benedictine and Cistercian monasteries of the 11th and 12th centuries. Figures such as St Gertrude were devoted to the Sacred Heart.

Several centuries later, the devotion was promoted by saints such as St John Edues, who was born in 1601. He composed the Dviine Office prayers for the feast, and wrote a book about the Sacred Heart.

St Margaret Mary Alacoque was born in 1647. Between 1673 and 1675 she experienced visions of Our Lord, relating to the Sacred Heart and the 12 promises of Jesus. These met with a sceptical response. But St Margaret Mary was supported by her spiritual director St Claude de la Colombiere. (interestingly he came to England and chaplain to the Catholic Duchess of York but he was arrested on a false charge of treason and imprisoned in London).

In images of the Sacred Heart, we see Jesus with his human heart clearly visible. It is surrounded by a crown of thorns, but radiant with light, and with the fire of love, and topped by a cross. The devotion is richly theological. The love of God is contained in the human heart of Hesus. It is a Heart that suffers because of our lack of love. Our sins break Jesus’ Heart. His Heart is also broken on the cross, when the soldier rams a lance through the side of Jesus, piercing His Sacred Heart, from which flows blood and water. Every drop of His Precious Blood flows out from His Heart. Jesus give us every ounce of love from his Heart. It is the source of His love for us. It is the seat of His mercy. The Sacred Heart of Jesus is a place of healing, refreshment, and forgiveness.